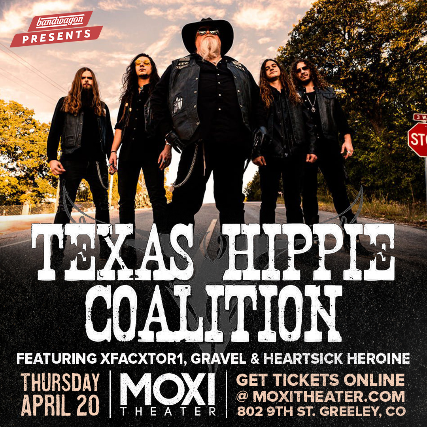 Backyard barbeques, barroom brawls, tent revivals, and big rock festivals alike are suitable environments for the Red Dirt Metal of TEXAS HIPPIE COALITION, a band with a sound so devilishly electrifying that they had to come up with a new genre to describe it.

BIG DAD RITCH captains this pirate ship of bikers, outlaws, troubadours, and hellraisers, welcoming all comers to the THC party with gregarious charisma and Southern charm. Across a half dozen albums, countless club gigs, and show stealing performances at Rockstar Mayhem, THC has spread the good word of big riffs, big hooks, and wild times.

High in the Saddle is a record full of unashamed, full-throttle ass kicking. It’s the band’s second pairing with producer Bob Marlette (Black Stone Cherry, Rob Zombie) and sixth album over all, on the heels of the No. 2 Billboard Heatseekers slab, Dark Side of Black .